In this episode of Stories Found, we hear the hilarious story, The First Time I Got Naked in Front of a Bunch of People I Didn’t Know by Max Langert.

Max takes it all off and describes his first experience at a spa in Amsterdam. 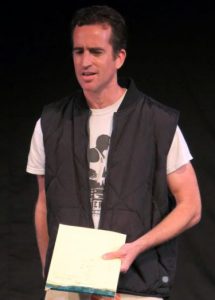 Max Langert has had plays produced in New York, Los Angeles, Boston and Amsterdam. He’s won the Henrico playwriting award, been named Best of the New Southern Theatre Festival in Tennessee and named Best of the Fest multiple times at FronteraFest in Austin. He’s told stories at Testify, Austin Bat Cave, and Listen To Your Mother. He also manages Cinnamon Path Theater and has a couple of teenage sons that make him laugh a lot.

Want to be a featured storyteller in a future episode?
We’re accepting submissions!